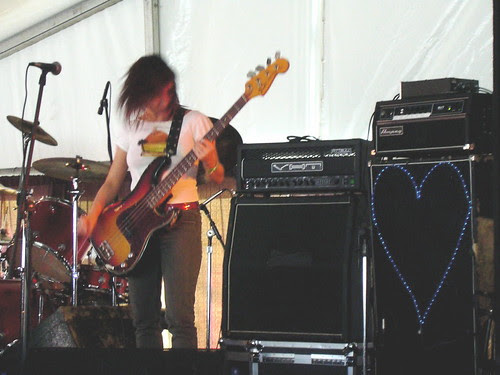 I haven't been to a show in a while, so I was excited to hear that Grumpy's was having an outdoor show, and on Dr. S's birthday weekend to boot. I don't like paying $20 for a 6-band show normally, since there's usually only one band you know is good and they don't play for very long, but this one had Helmet, Burning Brides AND the Melvins--two good bands and one all-time favorite.

All three bands play very hard, very tight, but somehow also very catchy without seeming "pop" at all. So even though The Melvins and the Burning Brides didn't play many songs from the albums I have, I didn't have any trouble getting into it. I recognized most of the Helmet songs, they even did "Just Another Victim". They seemed better than when I saw them last, possibly because they followed Jesus Lizard back in the day, a fate worse than death for most bands (I think that was the time David Yow exposed himself, but I'm not sure; he definitely kept pretending to forget their name--"Thanks to Omelet for letting us open up"; "Next up, it's Hamlet!")

Even though they didn't play the super-slow songs I love from Bullhead and Ozma, the Melvins are still one of the best live bands ever, and Dale Crover is definitely the best drummer of all time. It's like the drumbeat replaces my heartbeat. Their new bassist with the beard, braids and muumuu was good, too. I first saw them around '87 or '88, someone on the entertainment committee at Macalester liked them and invited them to play in front of the student union on a bright spring day. Most students walked away nonplussed, but I fell in love with their sound.

I hope this becomes an annual event, we need more outdoor shows for us old folks that can't stay up till 1 AM anymore.

JethSeux said…
I think what you fell in love with my dear, was Buzzo's fro, which though cool, was nowhere near as beautiful as yours! Still, I could see it in your eyes that if you were from a Borneo based headhunting tribe, you would have jumped up, scalped him, and taken that fro for your very own. I am happy you are not, for both mine, and Buzzo's sake, and I have perfect confidence that my sweetie will still be rockin out at 80 years old, even if it is at 3 in the afternoon instead of 3 in the morning.
4:49 PM