I GOT A NEW CAMERA 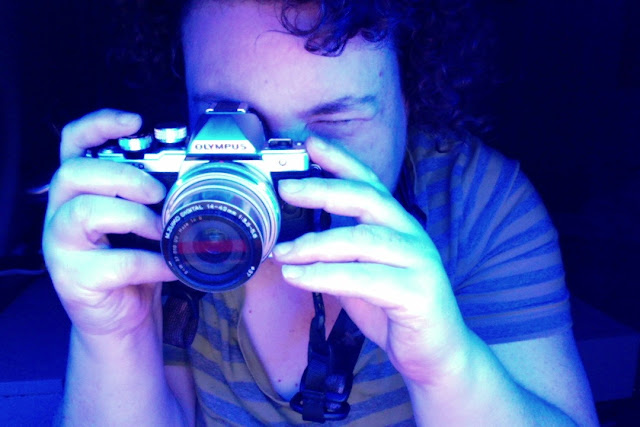 So, I decided it was finally time to get me one of those fancy cameras. My point & shoot had finally died from being dropped one too many times, and I went to see Chris Isaak only to have him appear as nothing but a big white blob on my phone. Since I take a lot of pictures already, it seemed a good use of my annual fun spending. We have a DSLR camera at work, and I liked the pictures it took, plus it has that good old-fashioned "clickity-click" sound when you shoot.

My main worry was actually the size of the camera. I went to a photowalk once and people seemed to be competing in a who-can-lug-around-the-biggest-Cyclops-beast-around contest. My tiny hands and achy shoulders can't handle that sort of thing.

When I did a Google search on "small DSLR cameras" I learned about mirrorless cameras. My photography class teacher said that the lens is actually more important than the body of the camera for taking good pictures, so why not get a small camera that can still change lenses? Some of the big-name photography sites liked the Olympus OM-D E-M10 Mark II, which I developed a gadget crush on right away.

OK, let's face it, some objects are just more esthetically appealing than others, and it's not terrible for that to be a factor in your purchase decisions. As long as it does what it is supposed to do and doesn't clean out your bank account, why not? I have to admit I love the retro look of the OM-D and sometimes I take it out just to look at it. That's why that The Life-Changing Magic of Tidying Up stuff doesn't work on me, I have a TON of things in my place that give me joy when I look at them. My motto is "Everything I do got to be funky", not "Everything I do got to be boring but utilitarian", after all.

Also, the controls have a good hand feel for me and seem like they'll last a long time.

The main drawbacks of having a camera that is both fancy and schmancy are 1) worrying about something happening to it and 2) spending money on endless accessories. For 1) my vow is that OM-D will never be removed from either a case or a very-sturdy camera strap and for 2) I just have to parcel it out slowly and put things on my Amazon wishlist. Like did you know that the straps that come with fancy cameras are no good and have to be replaced with something better if you don't want it to slip off your shoulders? And that there are separate bags for cameras, lenses, and your whole kit? But that makes no nevermind now that I can take night shots that don't look like those weird light shows you sometimes see when your eyes are closed.