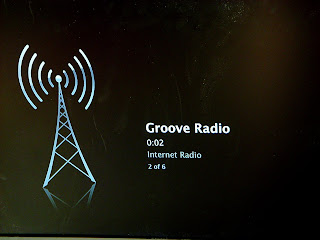 Oh happy day! The 2.2 update did it--I can listen to internet radio on the Apple TV without having to stream it from my computer. I'm blasting with the big speakers any music that the vast sea of the Internet can provide. You do have to create a playlist of radio stations on iTunes, since there still isn't searching available for radio like with podcasts and YouTube. Get on it, Apple! And while you're at it, could I have an iPod Touch with 80 GB of storage for less than $300? Especially now that LastFM is available on it. That'd be great, thanks.
Posted by ash966 at 11:24 PM 1 comment:

Jason had an insightful post on newspapers in the Internet Age on his blog wherein he suggested we donate to keep the watchdogs of the press going. In an aside, he mentioned subscriptions for music:

To be honest, it's the same thing with music downloads. I've been screaming for monthly subscriptions for years now, and they're still not here. (At least not on the scale of an iTunes or Amazon.)

Of course, I had to respond.

I'm sorry to hear you've been screaming for years--you must be very hoarse. I believe the service you're looking for is called Rhapsody. I don't know what counts as "the same scale", but they have ads on TV. I don't know why anyone would pay $12.99/month to rent music, though. I want to own my music, I don't want some company to be able to take my access away or jack up the price at a whim. Rhapsody's main market must be people who don't own much music, have a lot of electronic devices but no interest in learning about podcasts or Internet radio, and have tastes that change on a monthly basis---AKA teenagers. Podcasts are free, internet radio is free, LastFM is free, Pandora is free, Songbird is free, making any streaming Internet audio into a podcast is one-time cost of $15, so why pay $156/year to sample new stuff?

If an internet radio station is good enough, make a donation. Radio stations also add news, personalities, tour dates, and other added value in addition to the songs themselves, so that's another aspect worth rewarding. I admit I am very anti-subscriptions. I don't have cable and I won't get a PVR because of the monthly fees. I will buy the occasional TV show on AppleTV. Netflix and certain magazines are the only subscriptions that are worth it on a quality-vs-cost basis.
Posted by ash966 at 11:44 PM 4 comments: 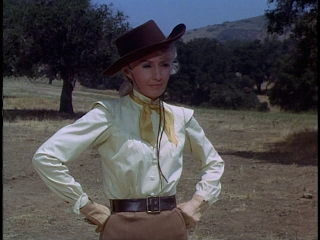 My other favorite TV Westerns, The High Chaparral and Maverick, are sadly not on DVD, but the 10 discs of The Big Valley, Season 1 should get me through summer reality-show hell.
Posted by ash966 at 1:21 AM No comments: