Those of us who read science fiction know that even SF of the finest quality can be represented by truly fugly covers that cause us embarrassment while riding the bus. The two major ways they tend to go wrong are: 1) attempting to depict scenes in the book photo-realistically while failing in knowledge of basic anatomy, and 2) having way, way too many things (and fonts) going on at the same time. No wonder e-books are so big with the fandom. 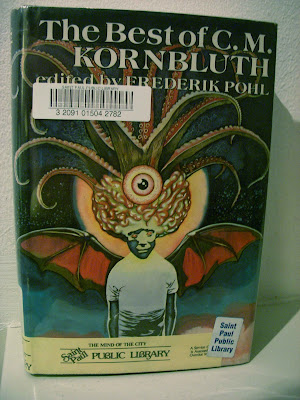 This is the one that allowed me to finally realize my dream of having something on Good Show Sir.  Why, hello there, giant-brain-eyeball-octopus-bat-guy! And what’s behind your head? It’s not the moon, because it doesn’t go all the way around. An enormous cantaloupe, perhaps? 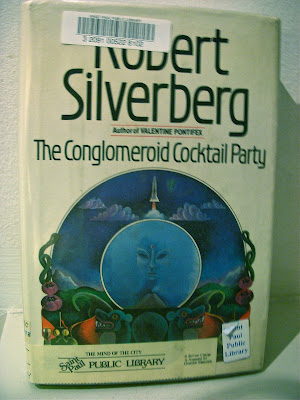 This one just has too many elements. Do we really need a blue alien, a rocket, purple tomatoes/pumpkins, pseudo-Mayan panther/snakes, AND a bug-eyed alien with one antenna holding a wine glass? 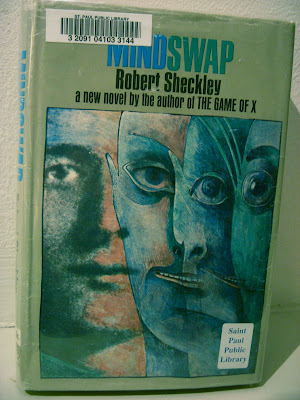 If this is about a human who swaps minds with an alien, should he be photo-realistic while the alien looks like a child's drawing? Or is he turning into a child's drawing? It seems the artist was like, "OK, I took the guy from a photo and put it through one of those artistic Photoshop filters, but how the heck do I make the alien? I know, I'll get my 10-year-old son to do it!" That mouth just bothers me. 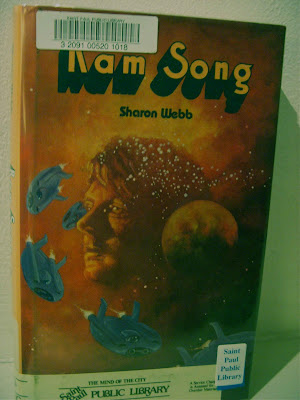 If you are an artist who can't create the illusion of three dimensions, should you really emphasize the fact with a "3-D" font?  Take a look at the guys nose and hair, not to mention the spaceships, which are like the kind of toys you find in a vending machine. The font, too, is like something I would have doodled in my 7th-grade notebook. What is a "ram song",  anyway, or do I even want to know?

I BOUGHT A HEADACHE--OR MY BEEF WITH BILLY BRAGG

Better than just about anything, really*


Someone recently brought up Billy Bragg to me as an exception that I should make to my curmugeonly, folkie-hating ways. Well, I did see him back when young and less set in my convictions, and he did not impress me that much.

(Now, I want to preface this by saying that I do not feel the burning hatred of a thousand suns for actors or musicians who express political opinions, such as some conservative commentators feel for all those not named Ronald Reagan.  If you go to far in that direction, you might as well say anyone who was not actually a politician couldn't comment on politics, and how sad would that be? It would eliminate both Noam Chomsky (linguistics professor) and Glenn Beck (morning drive-time DJ). Glenn Beck isn't wrong because he's self-taught, he's wrong because he thinks Obama will give the United States to George Soros to make into his own personal socialist fiefdom.)

Bragg started out with a recording of "That's Entertainment" by the Jam just before he started out, which was a bad idea, since it was better than anything he had to offer. Bragg has one great song, and someone else did it better than him. He proceeded to give us about 1/2 hour of music and 1/2 hour of not-very-good preaching to the converted. If you don't know the difference between Eugene McCarthy and Joe McCarthy, you really should not be talking. I personally don't know the names of a large amount of British politicians, but I don't go to London and harangue people about them. I mean, the United States gets into all sorts of messes abroad, so go ahead and criticize us, but "Saddam Hussein is a bad man--but war is wrong"** is not really news to those of us who have a Nation subscription.

If I was at a protest or political rally, I expect that sort of thing--but when I pay for something I expect entertainment. When I see Lightning Bolt or Melt-Banana or the Cows I know they aren't everyone's idea of entertainment. but they do give their all. That's all I ask. If someone from the entertainment industry wants to write political commentary or run for office, fine by me. I will buy the book or vote for the candidate on their merits.

Too many folkies just do thing things half-assed in my view--the music's doesn't have enough weight on its own, and the lyrics wouldn't be good enough on the printed page.  I'll say it again--I like music for the music that's why it's called music.

**I swear he really said something very similar to that. This was in relation to the first Gulf war.
Posted by ash966 at 11:45 PM No comments: