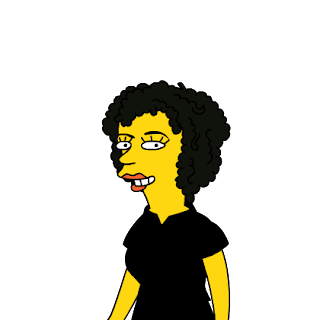 Well, I can finally say I talked to someone who's been made into a Simpsons character. The great comic artist Daniel Clowes was on the show, along with Alan Moore and Art Spiegelman. I once called Clowes on the phone when my friend Susan and I were visiting Chicago years ago. I didn't say much, I was just so surprised that he was in the phone book and actually picked up. I also saw him at the College of Comic Book Knowledge with Peter Bagge (the Hateball tour).

I believe Joey Waronker was the drummer for R.E.M. when they were on the Simpsons, but they never showed the drummer's face. I think there was some contractual thing--he was never to be considered part of R.E.M., just someone who happened to be on stage while they were playing. He may have been on the Beck Futurama episode, but I'm not sure. Maybe my friend Hellbound can weigh in on this. Of course, I knew Joey from Macalester and Walt Mink, back when only a few of us were regulars at their house-basement shows.

Alan Moore has a great voice. He would be good as a wizard in some fantasy movie. He had the best dialogue of the episode (paraphrased):

Bart: "Alan Moore! I loved the issues of Radioactive Man you wrote!"
Alan Moore: "Even though I made him a heroin addict who wasn't even radioactive?"
Bart: "I don't know, I just like to see him punching things."

JethSeux said…
You are a very cute Simpson indeed, but it was kind of a subdued fro so I must say I didn't recognize you at first!
8:07 PM

ash966 said…
Thanks sweetie, they didn't really have a crazy jfro like mine as an option.
10:40 PM

JethSeux said…
NO ONE could have a crazy jfro quite like yours my darling!
5:51 PM