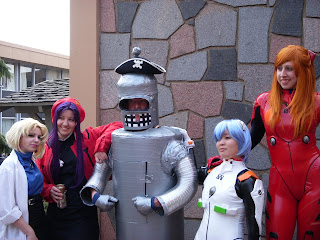 So, I went to Anime Detour last month and a good time was had by all, although I did put my back out for a week afterwards, hence the lack of posts in April. Apparently, I can no longer sit cross-legged for any length of time because the nerve in my leg starts hurting, making sitting in a chair very painful, which makes it hard to share my wit and wisdom with all the Jfro fans.

My dear friend KathySRW let Dr S. and I stay over at her hotel room, which was great and definitely the way to do things. Next time I may spring for a room or split the cost. Kathy's daughter was dressed as Light from Death Note, a 2008 cosplay favorite, along with Bleach, Hellsing, and the ubiquitous Naruto (In my day, ninjas were remorseless killing machines, and that's the way we liked it. Now get off my lawn with your ridiculous orange jumpsuit!) Here's some more pictures from my Flickr account.

We got to check out some new shows, of which our favorites were Flag and Witchblade. Flag was a serious look at war through the eyes of a photojournalist (literally, the whole show has the appearance of being shot through a camera viewfinder), and Witchblade was pure cheesy superhero fun (a superweapon chooses one woman with extremely large breasts to wield it in every generation, giving her nigh-invulnerability, a thirst for combat, and a desire to go without underwear).

Anime Science Theater 3000 was a new feature--a good idea, but it didn't live up to the possibilities. The show being mocked was Desert Punk, which didn't seem to take itself very seriously in the first place. I was hoping for a really, really bad old anime from the 80's, something like the Humanoid, named by Jonathan Clements as the worst anime ever made. Even so, the room was packed so close I could hardly breathe. It's a good thing Anime Detour is moving to a bigger hotel next year. The Thunderbird has a certain mid-century charm with its tacky Native American motif, but it's a motel with delusions of grandeur. Watching the cosplay contest on closed-circuit TV is not my idea of fun. Anime is so big now, a second con is starting up in the Twin Cities. Since it's not too accessible to mass transit, I won't be going (unless L'Arc-En-Ciel or Halcali appear live, not very likely in the Jpop-ignorant Midwest). Dr. S might go if it were all manly anime like Crying Freeman, Golgo 13, or Urotsukidoji.

For more on the anime phenomenon, I direct you to the documentary, Otaku Unite. It's a good history of fandom with some real characters in it. Plus, Kaiju Big Battel, how can you not love guys who dress like monsters and wrestle each other ineptly?

JethSeux said…
You certainly have my number as to the manly anime, though I would have to say Parasite Dolls is my fav that I have seen this year.
It did suck to have to watch the main event on closed circuit, very poor planning by the Detour staff. I always discover new titles at the Anime Detour though and Flag is truly phenomenal, a giant robot series with an arty sentimental exotica feel.
I am looking forward to St. Paul next year, hopefully without the floor sitting!!!
10:11 AM