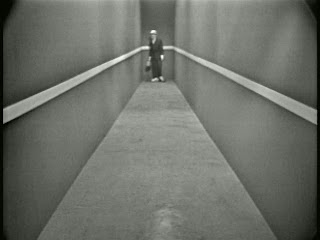 Ernie Kovacs had a budget of 50 cents, but at least he tried.

It's a weird time for TV. Some shows are at a really high level (Fringe, Mad Men, Dollhouse, The Office), while others . . . take the audiovisual abortion that is Secret Girlfriend, now in the Slot Of Doom after South Park, for example. I've always wondered what it would be like to live in a straight-boy porno movie without all the distracting sex acts and with the addition of 2 douchey frat-boy buddies who say stuff like, "Chillax, bro." A web series is finally ported to regular TV, and it's not The Guild but this? Why? If it costs Comedy Central about 50 cents in a time period they never succeed in anyway, why not try something that's actually good? Just a thought.

And then the long, boring, endless soap opera that was ER finally ends, and I'm ready for a decent drama, but they replace it with Jay Leno? I thought going to bed at 10:30 protected my tender eyes from his unfunny comedy and poor interview skills. Omigod, stupid people, when confronted by Jay Leno and a microphone, forget facts from elementary school? I need to see that again and again.

I'm picturing some television executives looking at the success of reality TV and saying, "look, this stuff is cheap and popular, so lets just save some money on scripts and sets and stuff and not try so hard." Chillax bro, indeed.