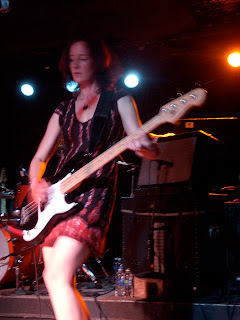 Ladies and gentlemen, the fabulous Miss Terry de Castro
All my Facebook peeps know it's been all about the Wedding Present this week, ever since I saw them on the Bizarro 21st anniversary tour last Saturday at the 400. It must have been around 1987 when Tigerlily played me a tape of George Best. It was like the Fall, The Smiths, Joy Division and the Buzzcocks all thrown into a blender of awesomeness. That's for me, I said. 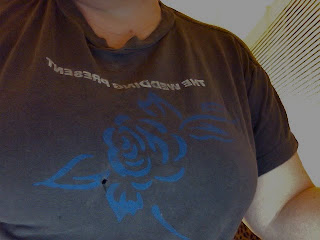 Here's the T-shirt I bought in England in 1989. It's too holey to wear outside, but I can't bear to throw it out.
So in 1994, Tigerlily & I went to England and stayed with a friend of hers named Terry. We had a great time. Little did we know . . .Dun dun dun . . .she would later become the bassist for one of my favorite bands of all time! (Be patient with me here folks, this is the closest my life comes to a soap opera.) So we hung out with her for a bit after the show and reminisced about old times. 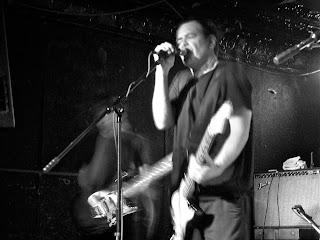 Here's Gedge rocking out and slaying us with his mordant look at relationships. Sorry it's so blurry, those guitars jangled so darn fast.
More pictures here.