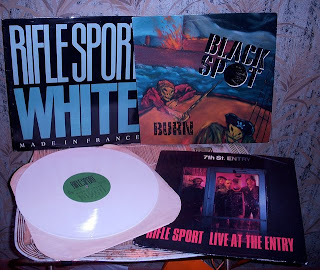 Back in the day, I swear I saw Rifle Sport on a monthly basis. "King Of Trash" was my theme song. I really like that type of lean, mean post-punk, usually associated with Chicago but we had our share, with RS, Breaking Circus, Vertigo and Arcwelder (though the latter was almost poppy at times). Is Flour one of the greatest bassists of all time? Possibly.

Of course, I could be confusing their shows with lead singer's J. Christopher's other project, the more metallic Black Spot, who sadly lack even a token Wikipedia page. I found this metal site which only lists one of their albums and falsely says they are from Chicago. They sing about being "stuck in the Twin Cities" and cover the Suburbs, for Buddha's sake! I think I sold their second album due to more conventional metal stylings, but I'm more tolerant in my old age, maybe I'd like it now.


Here they are--you can't quite get the awesomeness of J. Christopher because his hair is covering his scary, scary eyes. I swear, he looked like he'd take on the whole audience:

Here is some more for your edification: