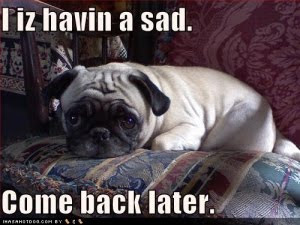 Bitch Magazine has been running this series about videogames which has been very eye-opening. Apparently, some people are all in a snit that people are buying casual games on their mobile devices. How is that a horrible thing, Jfro, you ask? Why, don't you know real games are all-immersive, cost $60 bucks, and feature creepy, uncanny-valley semi-real looking people? Because there is no possibility for exciting gameplay without fancy pseudo-3D graphics? Damn those old people, chicks and little kids*, how dare they want to play games! Their money isn't any good, because it will take away from game developers pouring money into the kind of games I like!

I don't remember whining like a little brat when the puzzle-like, old-school arcade-type games I prefer ceased to be the big thing. I just bought $10 shareware games online until I bought an iPod Touch. Somehow, tabletop role-playing has survived the onslaught of World of Warcraft, and I just played a cool new board game called Bananagrams. So, I'm sure hardcore games will still be produced, it just might be harder to get people to pay full price for a mediocre one. So, win-win. Now leave me alone before I show you what a real "traditional" game is and whip your ass at Centipede.

*Not that other people don't play casual games, that's the stereotype these particular hardcore gamers seem to have.