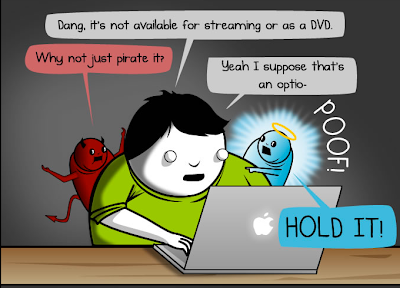 
So, the Oatmeal posted the above webcomic and some hailed him as a hero, while others said he was no-good pirating scum.

What I don't understand is, even if you put pirating aside as a consideration, because pirates are all EVIL and will never give HBO any money ever, their approach still makes no economic sense. Last summer, I had no shows to watch, so I thought I'd download Game of Thrones from iTunes, like I do with Mad Men and Doctor Who. I pay $10/month to get network channels from Comcast (no reception where I live), so I figure I can afford to pay for a show or two.

But no, it wasn't available on iTunes until last week, at the same time my library has it (right of first sale, bitches!). I was able to get pretty high on the waiting list, so why the hell would I buy it now? Even if I lived near only poor libraries that couldn't afford DVDs, it's on Netflix as well.

I guess HBO thought my eagerness to try Game of Thrones out would cause another $70/month to magically appear in my checking account, but it doesn't actually work that way,

Meanwhile, in spite of losing plenty of subscribers already, Big Cable wants to alienate first-tier subscribers like me by pressuring the FCC to let them scramble the signal so we will be forced to install a huge, energy-draining box. Because connecting a cord to the back of the TV is just so hard and they have to send their employees to take care of it personally, apparently. Not because it causes customers' perfectly legal time-shifting devices like the Boxee Box, EyeTV and HD HomeRun to totally NOT WORK or anything (making us rush to pay another monthly fee for their own DVRs, they hope). So if you have a cable directly connected to one of these devices or directly to a primary or secondary TV, please let the FCC know. If they go through with it, I'll drop Comcast so fast it will make their head spin, so again, how is it helping their bottom line?

A lot of librarians were sympathetic to Oatmeal's critique (if not his solution) because publishers and movie studios are trying to screw us out of our legal first sale rights or at least make library borrowing less appealing, by delaying sales of DVDs to us and only selling us extras-free rental versions, by not selling us ebooks or making them very expensive for us, and when they do sell them they are hard to download. Because their business plan is to get everyone to pay full price for each piece of entertainment they want (and cable channels they don't want) when the public didn't do that before, and in a weak economy too. Bravo, Big Media, Bravo!

Confidential to Salman Rushdie: I'll be more sympathetic to your plea not to cut ebook prices when you tell your publisher Random House not to raise ebook prices for libraries 300%.