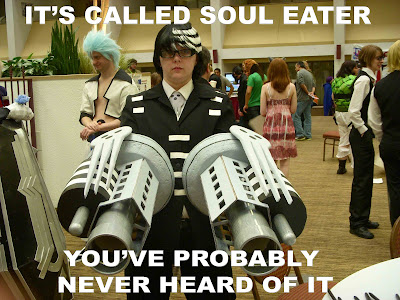 Note: This is an amazing costume. The post below is not meant to be derogatory of the person above, or any other awesome nerds I know.


These days, the lines between nerds, hipsters and the mainstream can get awfully blurry, Hence, I suppose, the flurry of articles policing and building a giant border fence around Nerd Nation. Tara Tiger Brown is all exercised about a supposed epidemic of women pretending to be geeks to get attention, and Patton Oswalt wants to set off the apocalypse so kids will no longer have it so easy finding cool stuff and perfectly ordinary office workers won't think they can spend their spare time writing Twilight fan fiction without being shunned like an Amish stripper.


And then there's this:

Watching movies and miniseries based on fantasy novels and comics doesn't make you a nerd. They just make you late to the party.
— Spike (@Iron_Spike) April 12, 2012


Yes,  Iron Spike and only Iron Spike can say who is truly a nerd. If you went to see Lord of the Rings and became totally obsessed with it and made costumes and wrote bad fan fiction, but didn't read the book first because, I DON"T KNOW, you are 12 YEARS OLD or something, no nerdy goodness for you! And just forget about it, Star Wars and Star Trek and Battlestar Galatica fans.  And what of Marvel and DC comics? They are pretty big companies which have apps on the iPhone and everything. Are they acceptable? Please inform me, I can go no farther in my nerdy voyage without your guidance!

Woo, this is almost as much fun as the gaming nerds telling me which types of videogames I should play!


Luckily, the vast majority of nerds are super-nice and the most welcoming people I know. After a bad experience in high school not being allowed to play D & D on account of being a girl, I finally felt ready to try tabletop roleplaying a few years ago. And guess what, nobody said "Get thee away from me before I get noob germs!" I was late to the Steampunk party too, but no one has stripped me of my teeny-tiny top hat yet. Conversely, I don't paint a scarlet "A" on some teenager because she's never seen Akira when I'm at the local anime convention. And being a librarian, I WILL find you a graphic novel that you will enjoy no matter who you are.

And to those few bad apples, please leave the whole "You don't like what I like the right way/at the right time/for the right reasons" game to those hipsters you hate so much.

PS. This article points out that the people called fake nerds, guess what, tend to be of a particular gender. Some of the nerd police are ladies, too. Maybe they want to be the only ones at the party?