INTERNET FANDOM: RUINING IT FOR EVERYONE SINCE 1994 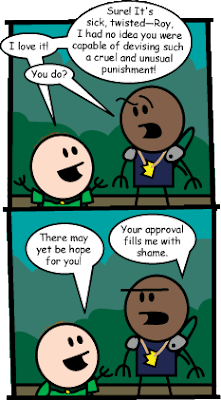 I have a pretty strong tolerance for other people disliking stuff I like. When you enjoy heavy metal and kung fu movies, you develop a pretty tough hide.  It's when fans of things I like are behaving badly that I get annoyed. That's why I've mostly given up on fan forums. So, let me tell you what you all need to do to make things better.

Don't get all pissy and sulky when someone doesn't think what you love is perfect in every way. Listen, I enjoy watching Doctor Who (though I'm no uber-fan), but acting like everyone who thinks it has any racial issue must be just looking for a reason to be offended is just sad. Wah! Wah! You ruined my perfect enjoyment of my favorite show! Grow up. The local newspaper critic refuses to ever give a kung-fu movie more than 2 1/2 stars even if he apparently got nothing but enjoyment out of it according to the body of the review, yet somehow I've survived.

If your friends are involved in an argument on the Internet, it isn't really necessary to fly over and immediately go nuclear on the other person's ass. That seems to be what caused the whole Racefail '09 kerfuffle.  I just want to say that if I am arguing with someone over my issues with a work they like or vice-versa, it isn't really necessary to come over and scorch the earth. I'm a grown woman, I don't need someone to come rescue me. If someone is truly being harassed, that's different - tell the admins or publicize it if they won't do anything.

It must be hard for creators to have access to so many critical opinions about them available, what with the Internet and all. I'm afraid, though, since the public has a wide choice of entertainment options, your best best is to either try to offer a classy response or say nothing at all if you want to not leave a bad taste in the mouth of possible future fans. Making fun of people who are much less famous than you are just makes you look petty. It might seem cool at first, making fans do your bidding on the Internet like little flying monkeys, but you really don't want to start a creepy cult, unless you want to end up like these guys. No, your fans do not count as a discriminated-against minority.

Strangely enough, driving around the Internet looking to pounce on anyone with issues about your favorite thing does not actually cause people to have kind thoughts about that particular thing.  It just makes people think that something with fans that slaveringly rabid is something they want to avoid. Who knew that my most controversial Internet statement would be that I'm anti-church burning? (And I'm an atheist!).

Here's what I said on GetGlue about the movie Heavy Metal in Bagdad:

Those Norwegian black metal church-burning losers should be forced to watch this 24/7/365 with their eyes taped open to learn true metal spirit.

months later, this let to a crazy flame war that ended with this:

Me: You admitted I didn't criticized {sic} Burzum's music or you for liking it. Previously, you conceded that church burners got what they deserved and that you had no argument for me about "metal spirit". So, you agree with everything I said in my initial comment. That's a weird way to "school" me.