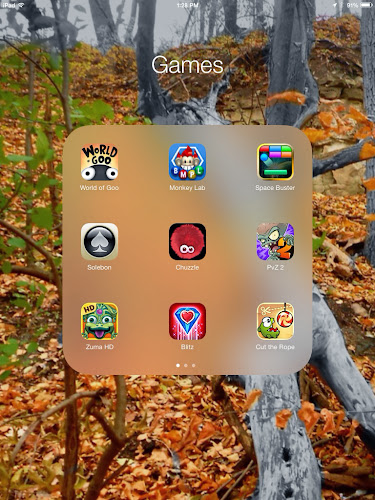 Part two of a two-part series. Part one is here.

Although I'm on record as being more about game mechanics than visuals, some games are more fun if you can see the characters facial expressions and some are too complex to work well on a smaller device. I can play Chuzzle or Bejeweled Blitz fine on the iPod Touch, but Plants vs. Zombies is just more fun on the iPad. World of Goo is hard to do on a small devices as you end up pinching and zooming a lot.

I've been playing tabletop role-playing games for several years now (Current game: Interface Zero 2.0). I started old-school with pen and paper, but now I am almost fully digital thanks to the iPad. I still enjoy the feel of rolling real dice, although my co-gamer Rawen uses the Real Dice Roll app.

For my character sheet, I use a fill-able PDF and the PDF Reader app. I tried other PDF apps and none were as good, they were hard to move around in and blurry, PDF Reader has a nice folder organizing system (as a librarian, I do love organizing) and you can import from Dropbox, Google Drive, or from a URL. That makes it worth paying $2.99 for.

Most game books these days come offer a .pdf version as well as print, with the smaller indie ones being e-book only. I use iBooks for reading. The searching by keyword or page number is pretty fast and you can organize your books by collection. I like the virtual bookshelf, although it's too bad they got rid of the fake wood effect in iOS 7. I use Dropbox to transfer the the character sheets and game books from the computer to the iPad, which doubles as bonus storage. When you open a .pdf in Dropbox, iOS detects the format and offers you the option to open it with any app that can read .pdfs.

Having a camera in your device is also nice if we have to end our session in the middle of an epic battle, I can take a picture of everyone's location so that Game Master Jthbeaux can recreate it next time. And if I need to search the game forums for tips, the Internet is right there. Chrome is my browser of choice on mobile, it's light and fast.

Yes, iPads are super-fun, but they can be useful for work too. For taking notes, I like to keep it simple, so I use Simplenote. Just text and URLs, that's all I need. I look at things like Evernote or Diigo and say, that's waaay too complicated for me. Simplenote is available as a web app too, so you have access to your notes wherever. Digital notes make it a lot easier for me to write conference reports or meeting minutes later, just copy and paste. I also use Simplenote for to-do lists, packing lists, movie/book/TV/music recommendations, etc. I am not the fastest typist in the world, but it's easier for me to type on the iPad than the iPod Touch.

For collaborative projects I use Google Drive. It's easy to make simple documents or spreadsheets like grant proposals or program budgets. I so rarely use more than 10% of Microsoft Word's bells and whistles anyway (and if I do, like making flyers, I tend to regret it.) Dropbox I tend to use more when I just need files for a presentation or outreach event, so I don't have to carry a bunch of paper (I have them on a flash drive too, 'cause I'm a belt-&-suspenders kind of gal).

I export my work schedule from our scheduling software and keep it in PDF Reader, along my bus schedules. 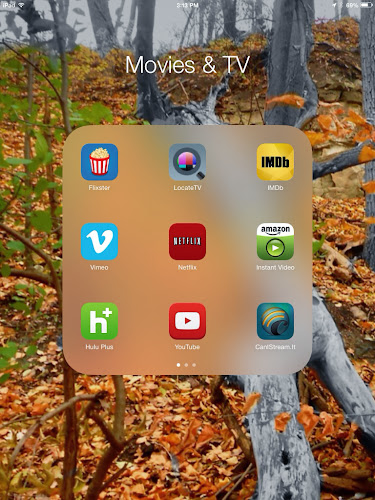 Except for Vines and very short YouTube videos, I only watch video on the iPad when traveling. It did save me when I had to spend the night at the Detroit airport. If you want to watch a bunch of YouTube videos while on the plane, VideoCache makes it easy to download them, although it does stall occasionally, so I'd do it a little ahead of time. Of course, I have Netflix, Huluplus, and Amazon Instant Video, along with Crackle, MUBI, Google Play Movies, Vudu, and Crunchyroll, just to cover all the bases. Searching on the Blu-ray player is awkward, so I have my iPad by my side when watching TV so I can do all my searching in the relevant app. If I don't know which service has which movie or TV show, Can I Stream It? lets me check all of them at once. If it's not there, you can set a reminder for when the title is available.

Most social media apps work the same on the iPod Touch, so I'm not gonna get into them. Rest assured, I spend my share of time on Twitter, Facebook, & Tumblr.