I MADE SOME SOUP & DIDN'T SAVE YOU ANY 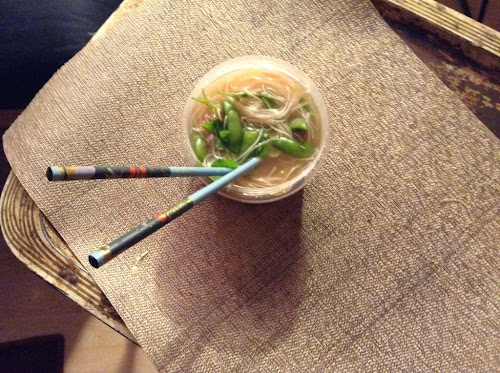 I'm a lazy cook. I tend to get obsessed with one simple dish and make it until I get tired of it & move to the next one: spicy Indian green beans, pasta with ham & tomatoes, scrambled eggs with fried potatoes.

So, when I read in Lifehacker about a guy who had an idea for homemade "instant ramen" with fresh ingredients, I was excited because I love soup, but it seems hard to make. Plus, I had some soup containers already (plastic ones, those glass ones in the article are very cute, but wouldn't survive a trip with me on the bus).

Getting the noodles half-cooked seemed like a challenge, so I bought rice noodles, which.the author said would cook in the boiling water straight from the package (actually, after trial & error I found it worked best to completely immerse them in cold water for an hour first). Rice noodles made me want to try pho, one of my favorites. I added snap peas because I had some frozen ones, which I rinsed in cold water first.

Meat is tricky, because it has to be fully cooked before you start, or you're in trouble. I like the author's suggestion of jerky, but for pho the taste is too strong. Again, I had some prosciutto, which is not exactly traditional, but the taste is delicate enough.

For the soup base, I mixed chicken Better Than Bullion, soy sauce, frozen crushed garlic, and lime juice. Then the noodles, ham & peas. After adding the boiling water & letting it sit for 2 minutes, I put in basil, pickled garlic & cilantro. Scallions & bean sprouts would also have been good, but I didn't have any.

All the ingredients were either already in my fridge, or from Target, except for the rice noodles, Better than Bullion, & pickled garlic, which came from Amazon (Prime means why not get it if you can wait 2 days, don't need to check for freshness, & would get it from a big chain anyway).

The result? Actually very good. There was some graininess at the very bottom, but I might not have mixed it well enough.