TOP TEN SIGNS YOU ARE IN A POST-APOCALYPTIC MOVIE 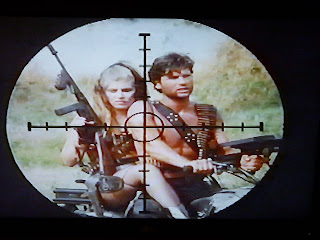 1. If you are a male, you have a mullet, yet no one is laughing at you.
2. Suddenly all sports and games of chance are "to the death": boxing, basketball, drinking games, motorcycle races, Old Maid.
3. You are surrounded by people with mohawks, face paint and/or tattoos, leather jackets, studded bracelets, and dominatrix outfits, but you aren't at an Exploited concert or 2-for-1 night at the Iron Eagle leather bar.
4. You have a sudden desire to pimp your car/motorcycle/bicycle with one or more of the following items: armor plating, barred windows, guns, spinning rotary blades of death.
5. No one has last names anymore, and badass-sounding one-syllable first names are preferred. Anyone who would introduce themselves as "I'm Clarence Higgenbottom III" has already met an untimely end.
6. Mutants!*
7. If there is a rumored "paradise" or "promised land", you won't find it. It will turn out to be a) a trap b)just as bad as everywhere else, or c)the movie will end before you get there.
8. Guns may be around, but people prefer more unique and stylish weapons such as flamethrowers, arrows, killer boomerangs, whips, and the ever-popular crossbow-on-a-gauntlet.
9. There's a megalomaniac around with a crazy plan to fix society by such means as: rejecting all technology, reviving the exact technology that caused the apocalypse in the first place, breeding with the last fertile women, killing all the fertile women, or simply forming a Nazi biker gang. These plans never end well.
10. Seeing your loved one(s) murdered before your eyes made you a bitter loner thirsting for revenge, but it's not the Old West or ancient China (there may be kung fu and/or horses, however).