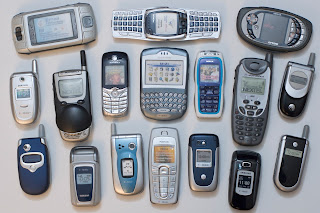 JethSeux said…
I pretty much agree with my sweetie on most things outside of the realm of the show Jackass!
I do like using the voicemail of credit card companies and my bank though, where I don't have to interact with someone trying to shoot the breeze and sell me protection already guaranteed under federal law, but don't have to log in online.
I gotta say I am still dead set against texting as anyone who knows me knows. It is pure technological devolution, a technology that makes communication more difficult rather than easier! Unless I have a bad case of laryngitis, I can't see how playing thumb polo with a micro gadget is going to be simpler than picking up the phone and leaving a voice mail!!
12:20 PM

Luke said…
As a cost cutter I have been pushed more and more into your line of thinking. I dislike commercials so I only have cable for internet and have loved being a Netflix/streaming media user. Recently I dropped cellular texting and was pretty scared to do so, as it is my preferred method of being reached. But now that I have an old ipod touch i too am doing the free texting and it seems to work fine so far, and it keeps me from reading texts in the car! Next up I am dropping down to the lowest cellular plan for voice considering besides my girlfriend, I do in company minutes with my family which doesn't count and all other calls I simply do not answer to force them to leave me a voice mail.
As for smart phones, I was once always on the bleeding edge of this with my 500 dollar phones being upgraded every 6 months, but as they increased the cost on internet usage I eventually dropped that part of my smartphone. The catch is ALL new smart phones require cellular internet. I am a user of apps like GPS software and texting and video recording. So now I am left behind because I refuse to pay the 80+ dollars a month. I just want a powerful computer in my pocket!
4:30 PM